The reach of virtual reality is beyond marketing, business, gaming, and commercial success. “I have personally been called to community and philanthropy through my experiences in VR. If we move one person at a time to action, gratitude, and inspiration, we are moving in the right direction.” Paula Cueno said for an article in Forbes pointing out the societal impact of Virtual and Augmented Reality. For the past two decades, people’s affinity to digital technology has made it easier for the companies to instill the potential and the vital role of VR and AR. True enough, the technology indeed went beyond what is commercial and made an impact on several issues like in environment, sustainability, community building, equality, and science.

The concept of sustainability is one that has been in the talks for a while; from personal lifestyle to big brand companies looking for ways to become more sustainable. There are not many consequences to sustainability but rather the problems lie with ways to achieve it. Fortunately, with this age of digitalization and technology the concept is more achievable than ever and its benefits even more.

With a life-changing situation like the current COVID-19 pandemic, virtual shopping has been on the rise. Although the experience of going to a real-life store is still unmatched with more physical restrictions, focus on safety and wellness, and demand for fast delivery the concept of shopping virtually has become more appealing. With this development brands like Gucci, IKEA, and many more have integrated technologies like VR and AR to present their collections. IKEA has utilized VR to showcase hyper-realistic designs of its products in home and work environments so that customers can pick and choose the furniture they want moving it and placing it around with ease. On the other hand, Gucci has entered the AR space working on exploring the concept of digital beauty and fashion. Their mobile application uses AR technology and camera tracking to allow users to try on their shoe collections, makeup, hats, etc., from the comfort of their home. Sustainability wise VR/AR technology has allowed people to try on and see products in a somewhat realistic manner from home. Therefore, reducing the carbon footprint and lessening the transport cost.

Digital Fashion Week was a big step in moulding sustainability. With travel and physical restrictions, fashion week shifted to the online platform, but what exactly did that mean for sustainability? Since fashion shows are now limited to a few minutes of air time, Production teams are stripped down to its essentials thus, production costs were sustainably less.

The realm of virtual reality has a lot of unexplored avenues that people and companies haven’t explored on. Over the last two decades, the concept of virtual identity through VR has been explored using different social media websites and applications like MySpace, Facebook, Hi5, Yahoo Messenger, to name a few. These applications are created to virtually connect people whenever and wherever they are, which eventually started the concept of community building.

Groups or pages as netizens call it are small communities that are brought together for a specific purpose. It may be a virtual group for a student body, a fans club, a political group, a village community, etc.

Non-government organizations took a step ahead to further their reach virtually. United Nations, for example, created UNV or United Nations Volunteers that connects you with organizations working for peace and development in need of skills like research, writing, art, and design. There are already over 12,000 volunteers from 187 countries lending their talents to organizations around the globe. Amnesty decoders is another online volunteerism group that helps digital volunteers on their research for human rights violations.  Another example of online volunteers is Translators without borders where it combines language skills and humanitarian aid focusing on education, health, and crisis relief.

Of course, the gaming industry where virtual reality is widely known also created a virtual community through avatars or based on the game program itself. This virtual community offers an open and within-reach experience for everyone making it inclusive even for people who can be physically-challenged.

An example of this virtual community is KFC Island by KFC Philippines and Ogilvy Philippines. For animal crossing enthusiasts, KFC Island is a virtual game promoting consumer experience complete with different attractions and of course, the KFC Restaurant! Free bucket of 8-piece chicken redeemable in the real world was also given during their release promo in-game!

Equality is a goal for many; however, it can be unattainable at times, nevertheless day-after-day and invention-after-invention, technology has created a space for equality to flourish. Whether looking at this matter economically, physically, cultural, etc. technology has brought forth an abundance of opportunities to unite everyone.

Platforms in all their types – social or educational – have become significant spaces for people to embrace their culture and ethnic background. Individuals from opposites of the world can come together and interact on these platforms. What is even more amazing is that with the evolution of technology and it is now even more diverse in the range of members; these very platforms have become more open to learning and understanding the differences between the numerous cultures that make the world go round. In a world where cultural and traditional aspects of certain areas were frowned upon are slowly but steadily becoming a staple in educating oneself of the world and its history.

Inclusivity is tightly related to achieving equality, the best example of this is how technology has become more and more inclusive of the multiple minority groups that exist. Breaking down one piece of technology that has pushed its boundaries and continues to do so every day in VR. The conception of VR, to begin with, was an eye-opening experience to what the world can be viewed as. In recent news, Microsoft has not only developed its VR system but also took it a step further but including the blind and visually impaired community. An idea that seemed impossible was made possible in the name of equality. Coined as the CANETROLLER, the conventional white cane was modeled with several technologies that focus on vibrations and sounds to mimic the real-life white cane. Although this model is still in its prototype stage, the ability of technology to give mankind the chance to invent products that can cater to more than one group of people is a step towards equality.

It is not new news that technology can make quite a bit of information accessible; however, it is the fact that technology has made whole experience accessible that is revolutionary. Google Maps has recently taken it upon themselves to create a category of Google Art and Culture whereby Google Maps allows its users to explore ‘The Hidden Worlds of National Parks’. The availability of this feature allows people all around the world to learn about lands and culture regardless of their location. The accessibility has equally put everyone on the same pedestal of exploring and learning. Looking at a completely different type of experience VR has allowed many to use it as a medium of emotional rehabilitation. The access technology has given us makes it easier for people to seek help, to get better, and to grow.

Anonymity and Equality may be on both ends of the spectrum but in virtual reality, online communities have no physical clues as to the body or expression of the other participants so it creates an equal perception of the person giving an empowering effect. Anonymity in virtual reality may also delve into human resource development in the future, where applicants are not judged with their looks as shown in their CVs. Online platforms for job hunting may be a starting point for this as they virtually connect professionals to employers in a platform removing biases or stereotypes.

Lastly, Virtual Reality’s contribution to healthcare has been on the move for the past few decades. It became a tool to treat phobia, mental health problems, and even helping with surgeries. VR has become a great tool in physiotherapy and aiding people who are mentally, and physically challenged. Virtual reality allows inclusivity for people with special needs in the society which eventually results in a fair and equal opportunity for everyone with different circumstances, shapes, or sizes.

Maxine Panlilio graduated with a Bachelor’s degree in Architecture at De La Salle-College of Saint Benilde in Manila. She started her career under Dominic Galicia Architects where she worked on high profile projects such as the National Museum of Natural History in Manila. Maxine is also the Founder of Maison Panlilio, an Architecture and Interior design studio based in Manila. Her inquisitive nature and love for writing lead Maxine to explore Architecture and Design through her blog, Compendiary (www.compendiary.com).

Rashmonda Ali is a 20-year old Egyptian-Omani creative that is in love with the art and design world. Pursuing a Bachelors in Visual Communication has only fueled her passion for creating art even more. She enjoys creating music, painting, photography, reading books and strives to learn more every day. Rashmonda turns to nature and its beauty to draw inspiration for her art. If ever you see Rashmonda around no doubt she’ll have a pencil and sketchbook in hand sketching out a new idea for a drawing or writing down her thoughts. Outside of her studying life, Rashmonda loves to adventure and make as many memories as possible with friends and family. 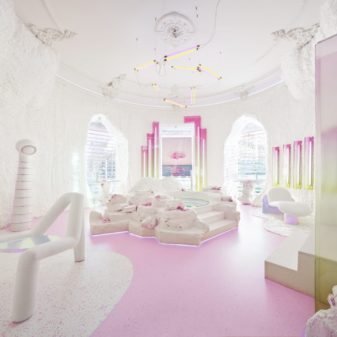